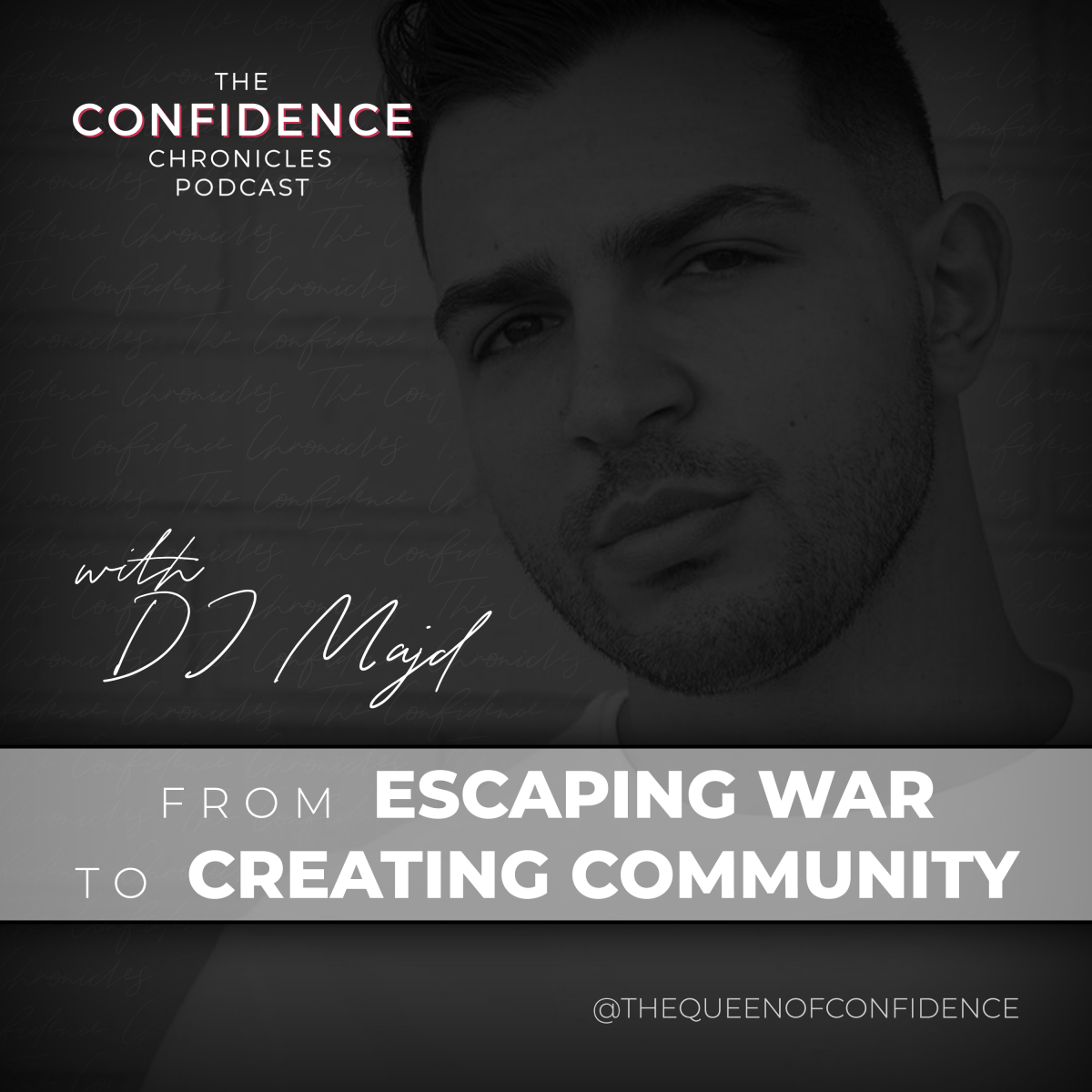 I’ve talked about Clubhouse before and how it’s such an amazing place to meet new people who you’d never get to meet in real life. My guest today, DJ Majd, is no exception and I know you’re going to love hearing this beautiful man’s story of hope and inspiration.

Originating from Syria, Majd is a highly successful Montreal based DJ with chart topping mix tapes reaching No.1 worldwide. He has such an amazing energy and is driven by his passion to bring people together and make a difference in the world.

In this episode, Majd shares his story of living in war torn Syria and immigrating to Canada with his father when he was just 16 years old. He talks about making the most of every opportunity, the power of gratitude and how moving to Montreal opened up doors for a creative like him to not only pursue his passion of music but also make his mark in the corporate world.

Majd is such a beautiful soul and his humility is evident in everything he does. We talk about our common experiences growing up in tragedy, how every situation is an opportunity and how we can all combine our experiences to learn from each other and grow together.

We talk about the power of music to transport someone into another world and how Majd uses his gift to bring people together and serve others. Seeing a need throughout Covid, Majd started the Montreal Connective Community and he shares how this is an opportunity to connect people together to build each other up and forge meaningful relationships.

Being an influential person in his community, we talk about leadership, the importance of being real and creating space for others to shine. You’ll take so much from today’s episode as you hear Majd’s story and learn about who he is. Enjoy x

TOPICS I MENTION AND WHERE TO FIND THEM:

[3:10]: Majd is a DJ, artist and community builder, how he and Erika met on Clubhouse and that Majd has such an inspiring story  [5:00]: How DJ Majd’s latest mixtape is #1 worldwide on 5 different charts [6:00]: How Majd and his father left Syria in 2011 when the war began and moved to Montrial, not knowing anyone or where they would go. They arrived during gay pride week and were amazed by the colour and energy [8:00]: How Majd started working at McDonalds on day 4, earned a degree in finance, found a job he loved and also wanted to pursue his passion for music. [9:30]: How Majd wanted to be able to share his energy through music and take them to another world. Montreal opened that door for him and he was able to pursue both analytic and creative endeavours  [11:30]: How Majd and his father experienced 5 months of war before leaving Syria and that his stepmother had to wait 3 more years to leave because she didn’t have a visa [15:00]: How Erika’s story is such an inspiration and that it brings hope and energy to others [16:40]: The impactful moment for Majd as the airplane took off and how he knew he needed to make the most of the opportunity he was given and make happen what he wanted as soon as he landed [18:00]: How we all have our moments and that sometimes people brought up in countries like Australia take what they have for granted but there is always opportunity to create something [21:00]: How people with no traumatic upbringing can have story shame but that we can combine our experiences, learn from each other and learn to be grateful and make the most of our opportunities [22:30]: No matter how hard your story is, there’s always someone who’s had it harder and gratitude will help you make the best out of your situation [25:20]: How Majd joined clubhouse and started the Montreal Connective Community as an opportunity to serve and a way to connect people together to build each other up and make meaningful relationships [27:30]: How people wanted to start getting involved because the purpose was authentic [29:00]: How Erika helps women step into confidence by getting metaphorically naked online so they see her struggles and know they aren’t alone [31:20]: How Majd is building his community by being as real as he can be with his intentions at all times. People believe it because it’s genuine, which builds trust and makes people want to get on board [35:00]: How Clubhouse is transforming itself from a podcast into a show and that Majd sees it as an entertainment world and an opportunity to create with real time reactions [38:00]: How Majd created music in one of Erika’s Clubhouse rooms which brought an incredible energy [40:00]: The people create spaces for others to shine are the true leaders of the world [41:00]: How Majd is running virtual events for companies like Ikea, Amazon and Google and aims to build international bridges [43:30]: Majd has promised to livestream in for Hamish’s birthday [44:00]: Majd is now doing mixtapes for workout instructors doing live streams so they don’t get cut off [45:30]: How music has the power to change someone’s life [46:30]: How Majd loves all different types of music because of the energy and loves to learn the cultural stories of how the music became what it is today [48:00]: Carribean, hip hop and house are his favourites and he is intentional about everything he does through his understanding of each type of music [50:00]: How somebody always paves the way so that we can be someone who influences [53:20]: Where to find Majd and his girlfriend, Isabella

Apply to the Scale Squad!

Where To Find Erika: