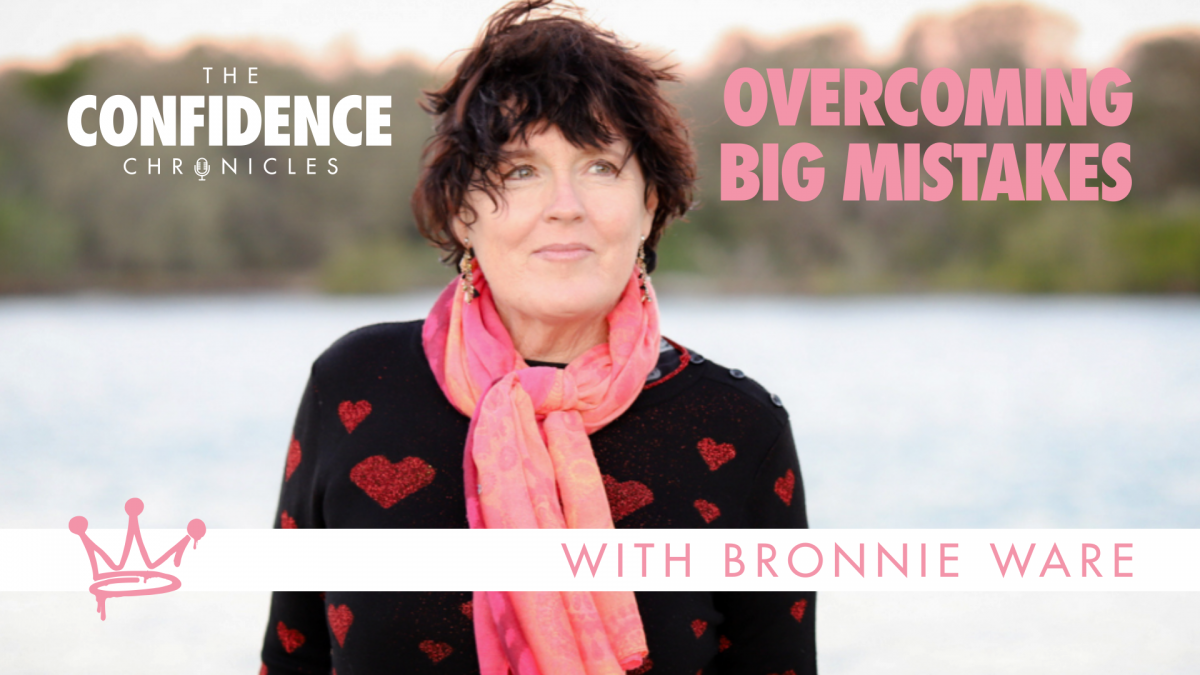 I have such a treat for you today as I chat with the incredible Bronnie Ware.

You’ve probably heard me rave about her book, The Top 5 Regrets of the Dying, which has sold millions of copies around the world. Bronnie is an international best selling author, sought-after speaker, and an all round amazing, humble and inspiring human being.

In this episode, Bronnie and I dive into her story, how she transitioned from corporate life to follow her heart’s desire for creativity and 14 years later landed a book publishing deal that changed the trajectory of her life.

We talk about how Bronnie has learned to tune into her intuition and the difference between honouring joy and following a path you think you should. She calls herself a gentle rebel!

Bronnie shares some of the mistakes she’s made in business and the valuable lessons she learned through those experiences. We talk about money, how it’s an energy that we need to respect, how she changed her money story and so much more.

You’re really going to gain so much wisdom from this incredible woman. Bronnie shares some tangible action points and beautiful questions you can ask yourself if you want to learn how to tap more into your intuition and connect deeper with your creativity.

Topics discussed and where to find them:

[2:30]: How I met Bronnie at a conference and we immediately connected. [4:00]: Bronnie’s journey moving out of a job she hated towards creative pursuits and how she ended up working in palliative care [6:45]: After setting up a songwriting program in a women’s jail, Bronnie burnt out and went through a dark period of depression. During this time her blog blew up, she become a mother and she independently released her book. [8:30]: Bronnie’s spent 14 years of hard work in the creative field as a self employed person. Eventually, her dream publishing house offered her a contract and her book has now sold millions of copies.  [10:30]: Bronnie talks about navigating motherhood, her book success and rheumatoid arthritis all at the same time. She was in survival mode and had to surrender and be present in each moment. [12:50]: Bronnie shares about buying a house, how grateful she is and amazed at how far she’s come.  [14:55]: How Bronnie lived on an island when she first transitioned out of corporate life but that she is grateful for the knowledge she gained that helps her be efficient in her business.  [21:00]: Money is a feminine energy that wants to dance with us. Bronnie shares how she spent a lot of her money and learned to respect and appreciate money. [23:30]: There is often a mentality that a man will save a woman. Bronnie shares about how she has always had to provide for her daughter and that it’s an energy on our side that wants to be on our side and respected.  [27:00]: We grow into our money story. Open your mind and heart to mastering it one step at a time.  [28:05]: Pretty please review my podcast! [28:50]: Bronnie talks about getting support and building her team and how trying to do it all was one of her biggest mistakes.  [31:00]: How Bronnie cut the business back to basics and built it all again with a lot more mindfulness and focus on her strengths and what she loved doing.  [33:30]: The things she loves the most are the things that make her the most money. Bronnie shares some of the lessons she has learned in this space.  [36:00]: The difference between honouring your joy and following a path you think you should. [37:15]: One of the blessings of living with disease is that it has taught Bronnie to have good boundaries and that she is worthy of love  [38:55]: Realising that she was spending money on paying someone to reply to emails, Bronnie wrote a big FAQ page and her emails dropped 80% [41:00]: How trying to reply to all my DM’s was putting too much pressure on me. You need to know that the effort you’re putting in is supporting the work you’re doing.  [44:30]: Ask yourself: Is it resistance or is it the wrong direction? Bronnie shares her experience asking this question becoming a beginner again as she writes her first fiction book.  [47:00]: The only way we get to know what we want is by making mistakes  [47:45]: Bronnie talks about her mum and grandmother and the parts of them she looks up to.  [49:00]: How some well known people are surprised when they meet Bronnie because she’s a regular person who isn’t caught up with the fame and success.  [51:00]: Bronnie’s conversation with John Demartini and how it changed the way she looked at herself. She kept herself small because of her commitment to simplicity and he helped her let go of a lot of her resistance to growth.  [55:30]: Bronnie loves how she has created a story out of her imagination. She wrote fiction because she wanted to see what she was capable of.  [57:00]: It all started with Bronnie’s photos and inspirational quotes so she’s looking at how she can get back to creating something that will also bring in an income. Bronnie talks about how she wants to move to the country. [58:50]: There is creativity within everyone, you just have to tap into it. If you didn’t have to think about money or responsibilities, what would you want to do with your time?  [1:00:30]: Tuning into your intuition is a friendship that you develop. The more you honour it, the more it trusts you to listen so that it speaks louder.  [1:02:05]: Where to find Bronnie  [1:02:45]: Join the Sistahood

Where To Find Bronnie:

Where To Find Erika:

Watch my FREE training: What it Really Takes to change your life